April is National Minority Health Month, and it presents a good opportunity for all of us to reflect on the numerous challenges and injustices communities of color face when it comes to healthcare in the U.S.

For example, African Americans and Latinos are at higher risk than non-Hispanic whites for some of our country’s most common health problems, including obesity, heart disease, diabetes, hypertension, high blood pressure, and stroke. To understand and address these disparities, greater attention is being given to the role of social determinants like income inequality, housing and food security, and educational opportunity.

A growing appreciation of the interconnected nature of health has led to novel interventions to combat persistent health disparities. In Mecklenburg County, North Carolina, a program supported by the Aetna Foundation called Village HeartBEAT (VHB) activated local faith-based organizations to help over 20,000 local residents access health resources and social services to reduce cardiovascular risk, a disparity experienced by 20% more African American residents than their white counterparts. As a result, VHB reduced smoking in the community from 17.4% to 13.9%, and obesity rates from 70% to 64.7%. This tremendous progress demonstrates the importance of taking a comprehensive approach to understanding and addressing disparities. It also provides an example of how we must address Alzheimer’s disease.

We know that African Americans are twice as likely as non-Hispanic whites to develop Alzheimer’s disease and Latinos are 1.5 times as likely. This is a staggering reality that is poorly understood by many providers, lawmakers, healthcare advocates, and philanthropies. Even less understood are the social determinants that contribute to this higher risk. For example, research by Dr. Jennifer Manly suggests that education, particularly the quality of schooling and literacy, has a strong influence on cognitive decline in later life among communities of color. Further, environmental exposure to pesticides and air pollution has also been linked to increased risk for Alzheimer’s. Given that people of color are more likely to be exposed to pollution compared to non-Hispanic whites, this risk factor for Alzheimer’s disportionately impacts Latinos and African Americans. 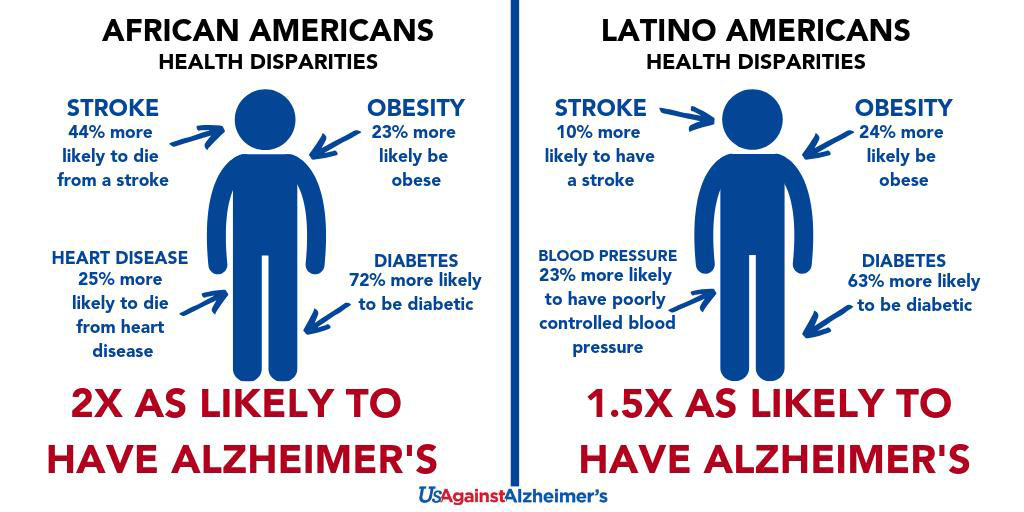 These social determinants and comorbidities work together to weaken brain health and undermine the resiliency needed to fight cognitive decline. This results in a heavy healthcare burden on communities of color.

These statistics are only exacerbated by significant disparities in diagnosis rates, access to treatments, access to research, and limited health literacy.

Encouraging proactive brain health across the lifespan by addressing social determinants must be a goal moving forward for the Alzheimer’s movement and the greater healthcare community.

This National Minority Health Month, let us dedicate ourselves to achieving brain health equity and eliminating brain health disparities for communities of color before the hardship of Alzheimer’s further destabilizes communities.

UsAgainstAlzheimer’s launched the Alzheimer’s Disease Disparities Engagement Network to help catalyze this change with cross-sector partners. We are partnering with four former surgeons general of the United States – Drs. Richard Carmona, Jocelyn Elders, Antonio Novello, and David Satcher – along with the International Council on Active Aging and other mission-aligned organizations to bring needed attention to the dementia crisis.

As Martin Luther King, Jr., once stated, “Of all the forms of inequality, injustice in healthcare is the most shocking and inhumane.” Let’s work together to bring justice to the Alzheimer’s movement. 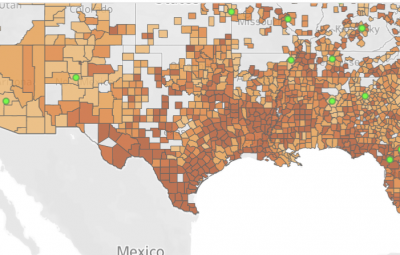